Paper Supply Shocks Continue to Mount
New paper supply shocks continue to mount on top of the numerous conversions and closures already in place. In uncoated freesheet, a fatal accident at Domtar’s Windsor mill put 600,000 tons of annual capacity offline for much of November, with only one machine back up and running until the fiber line restarts. In coated mechanical, in addition to the announced exit of Evergreen Pactiv’s Pine Bluff mill in October, Paper Excellence warned of potential delivery interruptions and system-wide downtime, including at least a two-week curtailment of the Crofton mill, in November due to a variety of supply chain disruptions. For all grades, the numerous general problems in the supply chains and transportation networks remain an impediment. (RISI)

R.R. Donnelly Determines that Chatham’s Acquisition Offer is a “Superior Proposal” to its Existing Merger Agreement with Atlas Holdings
R.R. Donnelley & Sons Company (“RRD”) announced that its Board of Directors has determined that an unsolicited proposal from Chatham Asset Management to acquire all of the common stock of the Company not already owned by Chatham for $10.25 per share in cash constitutes a “Superior Proposal” to the existing merger agreement with Atlas Holdings, dated November 3, 2021. Under the terms of the Atlas Merger Agreement, Atlas has agreed to acquire the Company for $8.52 per share in cash.

Paper Excellence Closes its Previously Announced Acquisition of Domtar
The Paper Excellence Group, a global diversified manufacturer of pulp and specialty, printing, writing, and packaging papers, announced the successful closing of its previously-announced acquisition of Domtar (NYSE: UFS). Domtar will operate as a stand-alone business entity within the Paper Excellence Group, with Domtar’s current CEO and management team remaining in place. There are no further changes to operating locations, business plans, or Domtar’s employee base at this time. 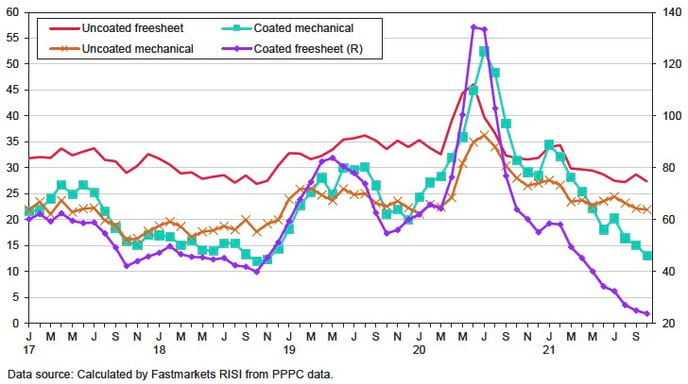