The Finnish Paperworkers’ Union’s strike at the UPM Pulp, UPM Biofuels, UPM Communication Papers, UPM Specialty Papers, and UPM Raflatac units in Finland started on January 1st and will now run until at least February 19th unless new agreements are reached beforehand. On January 24th the Finnish Transport Workers’ Union AKT commenced a blockade against UPM to support the strikes of the Finnish Paperworkers’ Union. And on February 1st the Finnish Transport Workers’ Union AKT announced that a strike will start on February 14th if the collective agreement negotiations with The Finnish Port Operators Association have not reached an agreement before. This will impact all goods in Finnish ports including paper from the Finnish mills of Stora Enso, Sappi, Metsa, delfortgroup, Nippon Paper and UPM. Negotiations are ongoing with the General Conciliator, so it is possible that parties come to agreement and strike can be avoided.

The bidding war for R.R. Donnelley & Sons Company appears to be over, with Chatham Asset Management coming out the victor. Chatham had originally offered $7.50 per share on October 12, 2021. Atlas Holdings then stepped in with an $8.52 per share offer, which RRD accepted. After Chatham increased its offer, RRD terminated its agreement with Atlas on December 14, 2021, and agreed to be acquired by Chatham for $10.85 per share in cash. Last week, RRD received an unsolicited non-bidding "Alternative Acquisition Proposal” from a strategic party to acquire RRD for $11.00 per share in cash. But on February 2, 2022 RRD announced that the unnamed "strategic buyer" had withdrawn its offer to acquire the publicly- held printer for $11.50 per share in cash. RRD subsequently scheduled a Feb. 23 special virtual shareholder meeting for the purpose of voting on the Chatham acquisition agreement, which the printer says it endorses. The transaction is expected to close in the first quarter of 2022.

Lack of trucks, rail cars and containers, as well as higher overall freight costs (labor, fuel, etc.), are making it even harder to deliver paper to customers on time. As a result, customers are seeing paper delivery delays of a month or more. On top of the delays, new price increase announcements are also stacking up. Coated paper importers led a price increase announcement for February that has now been joined by several domestic producers with $50-60/ton announced increases on coated papers for February. In uncoated free-sheet, the four largest producers, Domtar, Sylvamo, Pixelle and PCA, along with numerous smaller players, have proposed 6-9% price increases for February and March. Additionally, Irving has announced a new $60/ton increase on supercalendered (SC) papers for April on top of the January increase, and Resolute has announced a $50/ton increase on high brightness and other uncoated mechanical grades for March. (RISI) 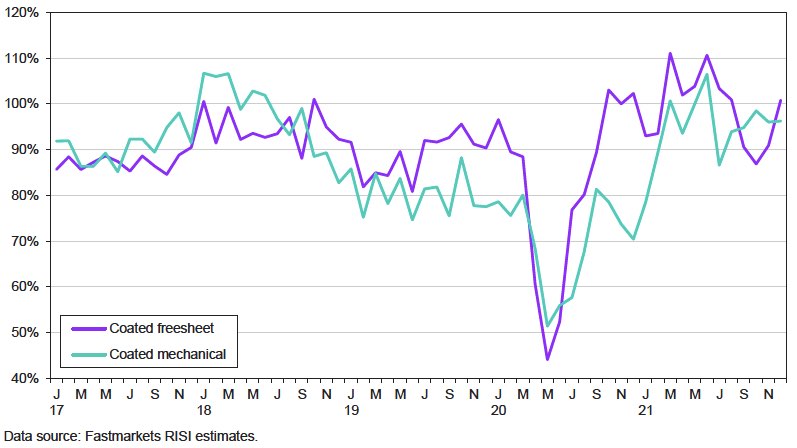 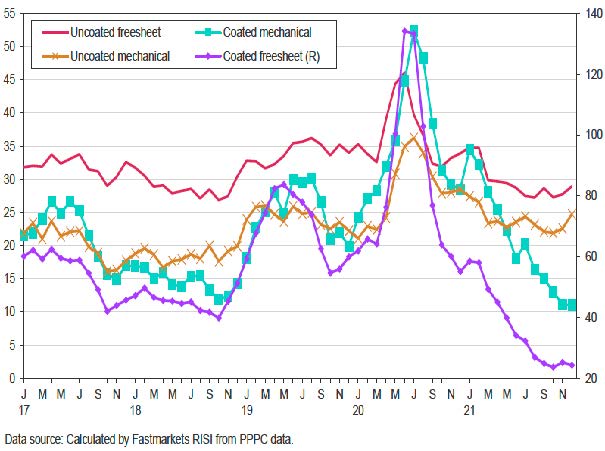