What UPM is saying

Jyrki Hollmén, Vice President, Labour Markets, UPM, said, “UPM’s goal remains the same – we want to negotiate business specific collective agreements with the Paperworkers’ Union as soon as possible. The only way forward is through negotiations.” To date, negotiations had begun only in UPM Biofuels, but they were interrupted by the Paperworkers’ Union just before Christmas. UPM will service its customers from its mills located outside of Finland to the extent possible.

What end users need to know

According to RISI, UPM produces 980,000 MT/year of Coated Mechanical in Finland, which equals about 53% of UPM’s European CM production and 18% of total European CM capacity. UPM also produces 350,000 MT/year of both SC and WFC in Finland, which equals roughly 28% and 29% respectively of UPM’s European SC and WFC production, and 8% and 7% respectively of total European SC and WFC capacity. The supply disruption caused by the strike, even if short-lived, will create even greater tightness in the global graphic paper market.

New round of surcharges by European mills

Sappi Europe announced that will be passing higher energy, transportation and raw materials costs on to its customers in the form of price increases of 10-25% dependent on the product segment, to be implemented by the beginning of February 2022 at the latest.

Holmen announced that the price for energy has increased approximately 200% since October forcing them to add an Energy Surcharge of 85 €/tonne to current pricing for a period of two months beginning January 15.

The European virgin boxboard producer BillerudKorsnäs announced the acquisition of Verso, the largest N.A. coated paper producer, for $825 million, with the intention of converting Verso's largest mill, in Escanaba, MI, to boxboard production. The conversion of the two machines at Escanaba will take several years but will ultimately add around 1.2 million tons per year to a 5 million tpy N.A. boxboard market. However, N.A. SBS production/demand has been on a downward trajectory; operating rates have been consistently below 95%; and input costs have risen dramatically in recent years, meaning BillerudKorsnäs’ move will create further challenges for the overall market and other SBS manufacturers like Graphic Packaging, WestRock, and Pactiv Evergreen. In addition to continued paper production in Escanaba during the conversion, BillerudKorsnäs plans to continue operating the Quinnesec mill and is committed to continuing to serve Verso’s existing customers 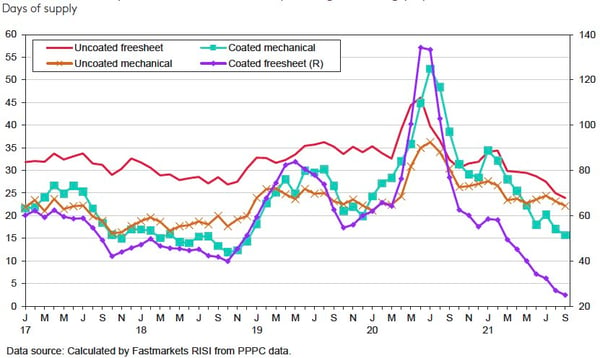